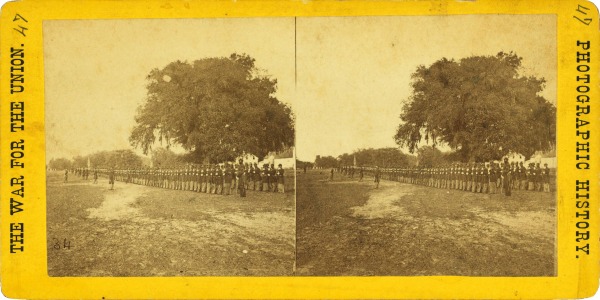 I do not think I ever had quite so proud a day…. Today, for the first time I marched my whole regiment through Beaufort & back. They did march splendidly, as all admit. The dear 51st did not compare with them… To look back on twenty broad double ranks of men, (for we marched by platoons) every polished musket with a black face at the side of it, every face steady to the front, marching on into the future; it was magnificent, and when we returned, marching by the flank, (this is in fours,) with guns at “support arms,” & each man covering his file leader, (the prettiest way of marching in the world) the effect was as fine. I had cautioned them before we left, not to be staring about but to look straight before them, & with their accustomed fidelity they did it. One of them said, since, “I didn’t see anything in Beaufort–every step was worth half a dollar,” & they all stepped as if it were so. It was just the way my old company used to do in Worcester–only think of the difference–what character & culture did there–here the evoked self-reliance of a race does with drill & personal magnetism of course added in both cases. And whereas there, as rival Captains indignantly averred, we [“]had the whole town to blow for us,” this was marching through throngs of prejudiced critics, officers & privates, who had all drilled as many months as we had weeks, & who were absolutely compelled to admit how admirably the regiment appeared. Dr. Rogers & others rode about among officers who came jeering and contemptuous, & had to say at last “they do splendidly,” one Captain in the N.H. 4th, the best drilled regiment here, & he bitterly pro slavery said in the hearing of our LtColonel [sic], to a circle of officers, “There is nothing in this Department that can excel them.” And indeed one of our recruits, who did not march with the regiment, watching the astonishment of some white soldiers, said, “De buckra soldiers look like a man who done steal a sheep“! i. e. I suppose sheepish.

Error: Twitter did not respond. Please wait a few minutes and refresh this page.